We were called by a customer with a Mexican Terracotta floor who was looking at having it taken it up and replaced but before doing wondered what it would cost to have it renovated. I visited the property in the nearby market town of Stroud in the centre of Gloucestershire to survey the floor and advise on options. Stroud by the way is a lovely part of the county and sits within the Cotswolds which is an area of outstanding beauty. 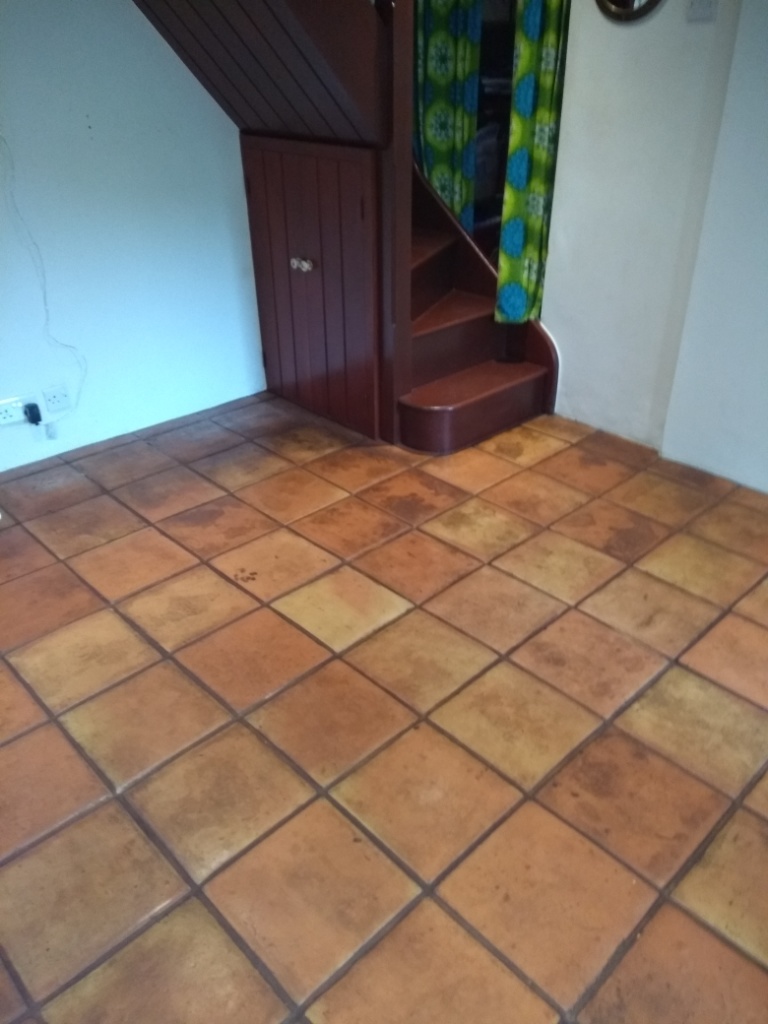 The customer had this floor laid thought the ground floor just five years earlier and had been was advised to seal it with wax. After three months the wax had broken down and started collecting dirt as you can see from the pictures. Unfortunately, he had not been advised the correct way to look after his floor and was now fed up with its appearance. Help was at hand and I was confident I could restore the floor for a lot less than replacing it, I explained what could be done, agreed a price which was accepted and agreed a date for carrying out the work. 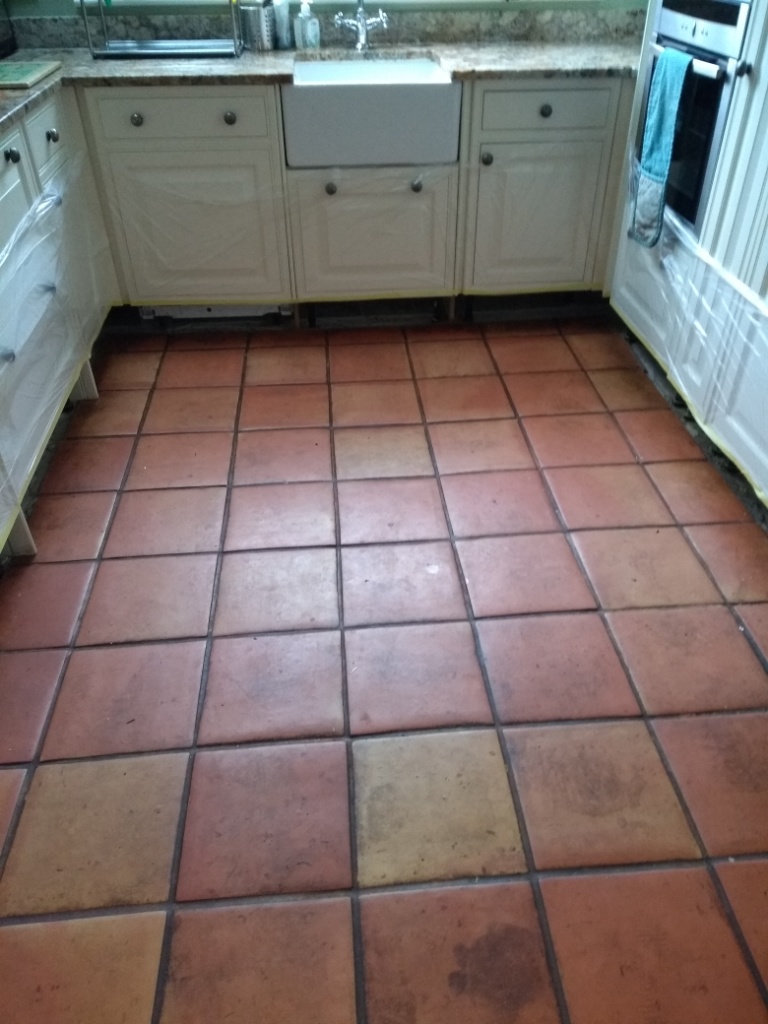 So, the first job was to strip the layers of wax and sealant off using Tile Doctor Pro-Clean and Remove and Go. I combined the products together to make a very effective cleaner and coatings remover and left them to soak into the Terracotta tiles for ten minutes, before scrubbing them in with a black pad fitted to a rotary floor machine. This process released a lot of dirt and waxes from the floor which I extracted with a wet vacuum and then retreated areas that needed more work until I was happy it was as clean as it could be.

After the floor was clean I set about on grout lines these were also in a bad state, they needed a lot of manual scrubbing with Pro-Clean which was worked in with a narrow stiff brush to get them clean. 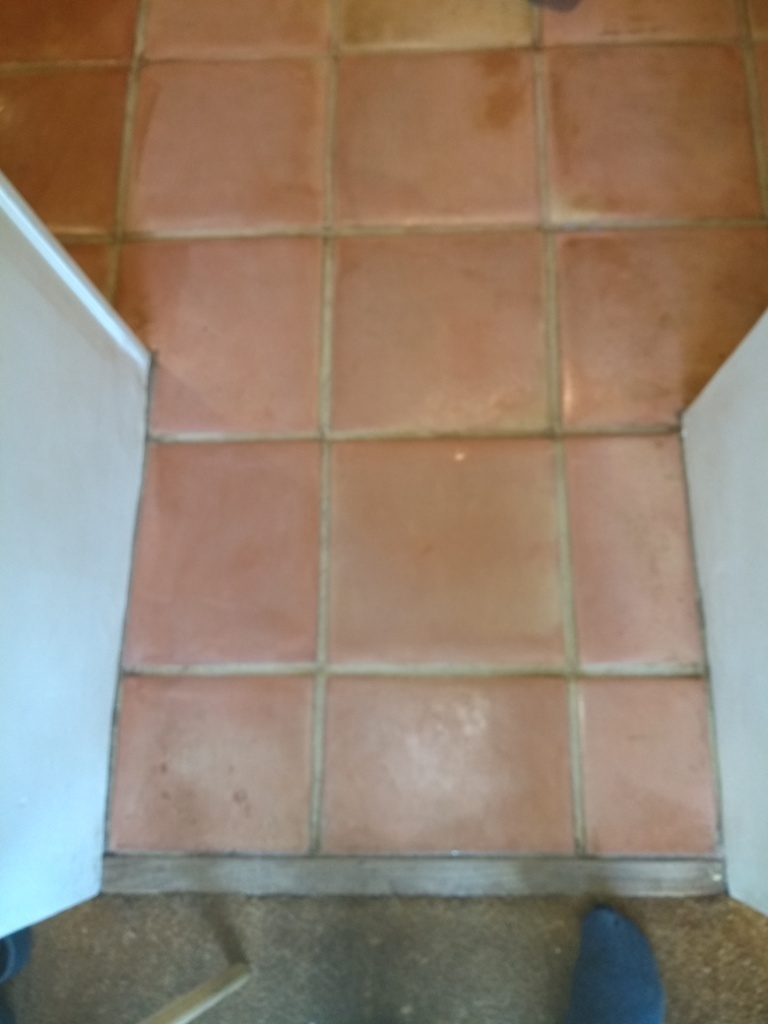 Afterwards, happy with the result, I rinsed the floor three times with water to remove any trace of the cleaning products and soil from the floor. Because I had to use so much water and cleaning products to achieve a good result I left the floor for nearly a week, so it could thoroughly dry out. Mexican terracotta is very porous, and it would need to be dry before sealing so I figured five days should be enough time.

I returned after five days and checked that moisture levels of the floor were satisfactory with my moisture meter. Once I was satisfied I was good to go ahead with the sealing. I decided to use two different types of sealant on this job. For the first coat I used Tile Doctor Colour Grow which is an impregnator that soaks into the pores of the clay tile protecting it from with and enhancing the natural colours in the process. I then applied six coats of Tile Doctor Seal and Go letting it dry in between coats. Seal and Go is a water-based blend of acrylic polymers that provides both a stain resistant seal and a durable low-sheen finish, which the customer had requested on this job. 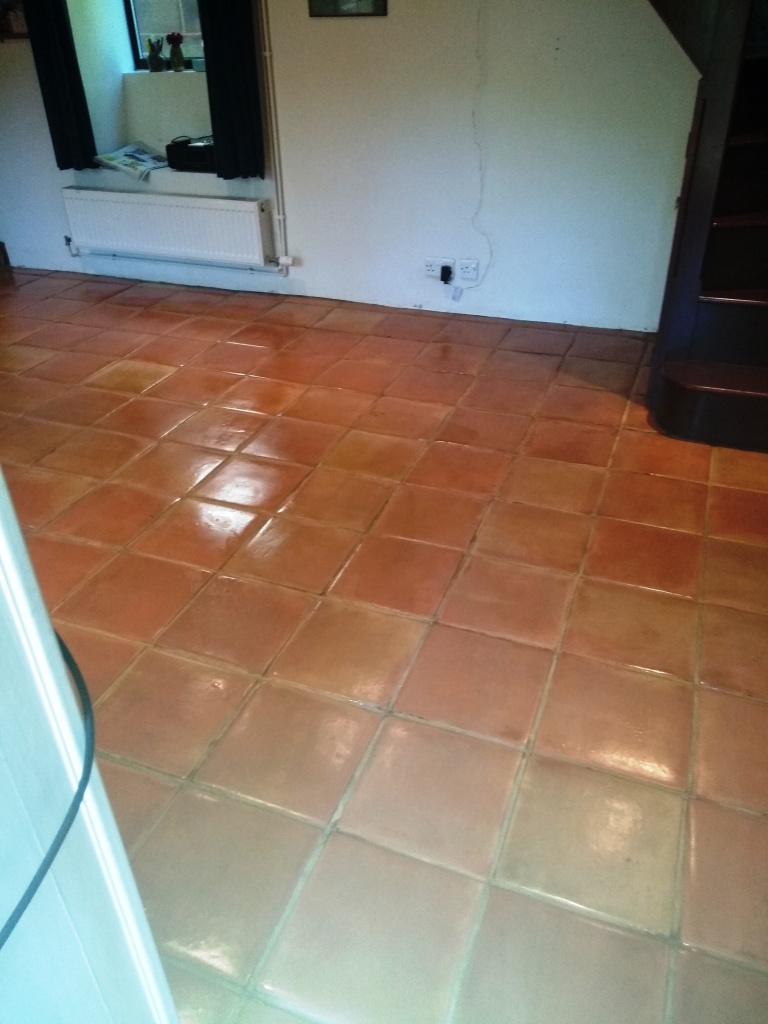 The customer was pleased with the result, he never expected it to look so good and had thought he was going to have to put a new floor down. Not only had we completed a great job for them, they had been saved significant expense too. 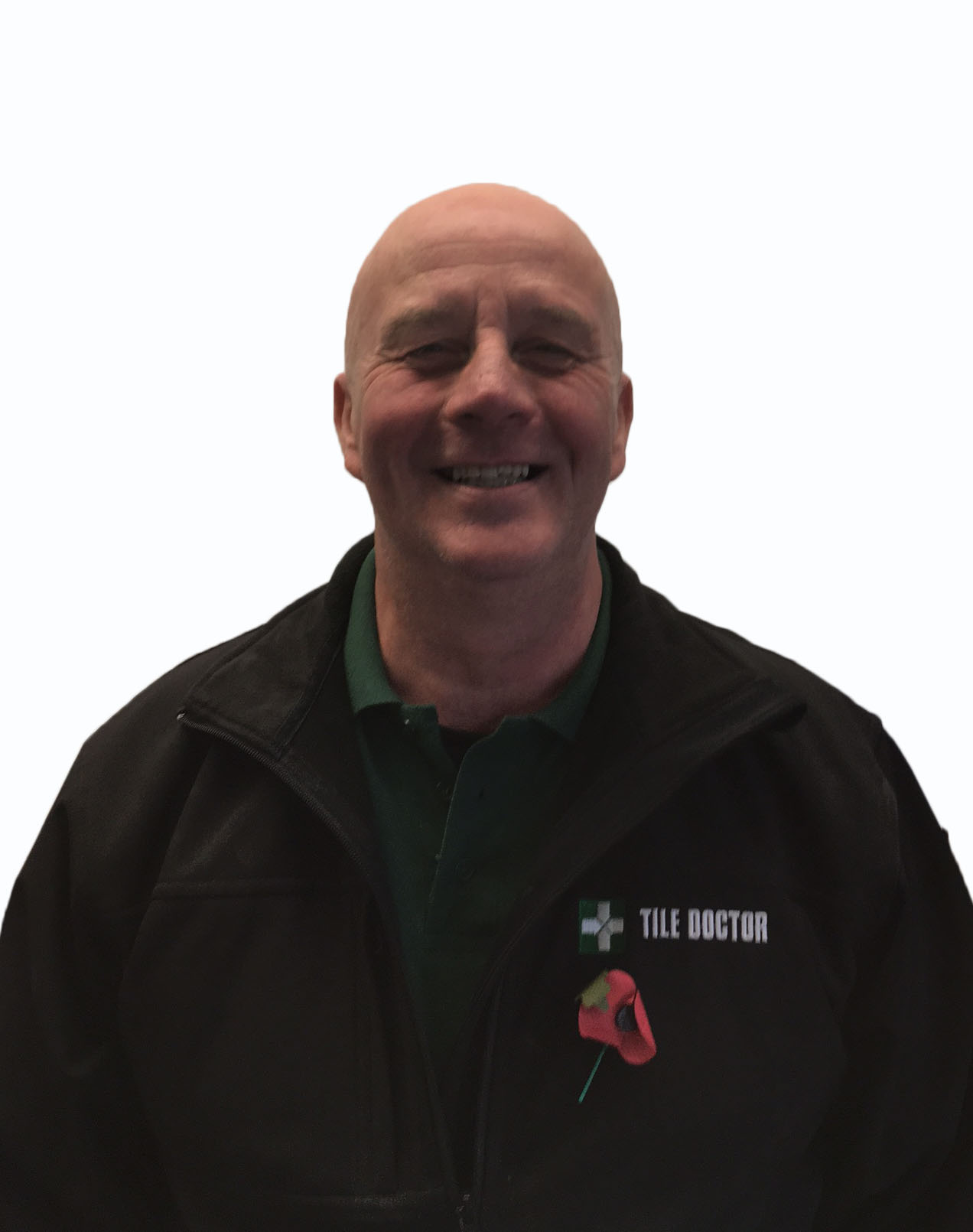 Malcolm was amazing and he did a great job! Thank you.
Yaser H, Gloucester

Malcolm did a fantastic job on our Victorian tiles. He contacted us within hours of making an enquiry. Was really helpful and the tiles now are restored to their former glory. I would highly recommend tile doc or and Malcolm
Vivienne L, Chippenham

Malcolm did a great job in renovating a limestone floor for us as part of a large project for Cheverell Ltd, which involved a new kitchen, floor and decorating.
Robbie H, Pewsey

Malcolm Crowther provided an excellent service. His response to my initial query was prompt and the work carried out was of a high standard. He was also very friendly during his visits and gave me some useful advice
Dave B, Bristol

Malcolm is extremely professional knowledgable and hard working. My limestone bathroom tiles look better than they did when they were first installed and at last have a beautiful sheen. Thank you.
Jo Y, Swindon

Malcolm was really hard working and punctual. He was very knowledgeable about our Victorian tiles and we are thrilled with the result. Would definitely recommend him to others.
Rachel H, Gloucester

Malcolm called in to demonstate how he could clean my full tiled bathroom grout. Very professional and likable. Returned to do a great job cleaning and sealing the grout, looks like new again. No hesitation in recommending Malcolm.
Andrew N, Bristol

So Glad I didn’t listen to my Husband and have the floor ripped up, an amazing job by done Malcolm, my tiles look brand new. So Happy, thank you all
Irena P, Bagstone